They’ve been a staple of defined contribution retirement plans for more than four decades, but stable value funds still have room to grow.

Speaking at the 2016 SVIA Spring Seminar, executives from investment advisor Callan Associates noted that stable value funds continue to be used by more than 60 percent of the 100plus large defined contributions tracked by their firm’s Callan DC Index. In fact, that percentage has actually been climbing modestly over the past three years. However, James Veneruso, vice president and defined contribution consultant in Callan’s Fund Sponsor Consulting Group, also showed a graphic indicating that stable value has been accounting for a gradually shrinking share of the total assets in those plans. And since 2005, Callan’s data shows, the crediting rates paid out by stable value funds have outperformed the Barclays U.S. Aggregate Bond Index, providing stable value with a compelling risk-reward tradeoff. 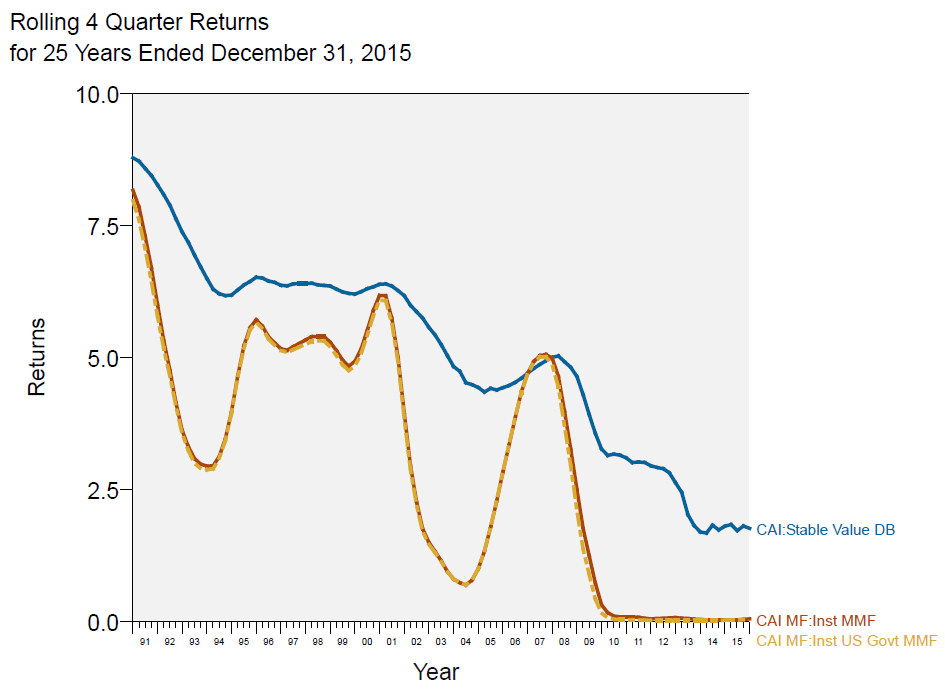 Upcoming rule changes for money market funds also seem likely to impact stable value funds and their appeal to plan sponsors. Beginning in October, the Securities and Exchange Commission will require institutional prime money market funds to let their net asset values float with their underlying market value. Prime funds also will be required to impose redemption fees and gates during periods of illiquidity in their portfolios.

Callan has taken the performance of stable value funds relative to money market funds into account when helping plan sponsor clients choose investment options for their retirement plans, and in designing—and in some cases managing—their custom target-date funds. The company’s Callan GlidePath Funds are custom target-date funds that use an open architecture approach. As such, they allow the use of best-inclass investment managers, and a transparent, low-cost, institutional fee structure. Callan uses a stable value fund as the principal preservation component of its Callan GlidePath Funds, with allocations to stable value ranging from 3 percent of assets in funds with a target date of 2020 to 15 percent of assets in those with a target date of 2005. 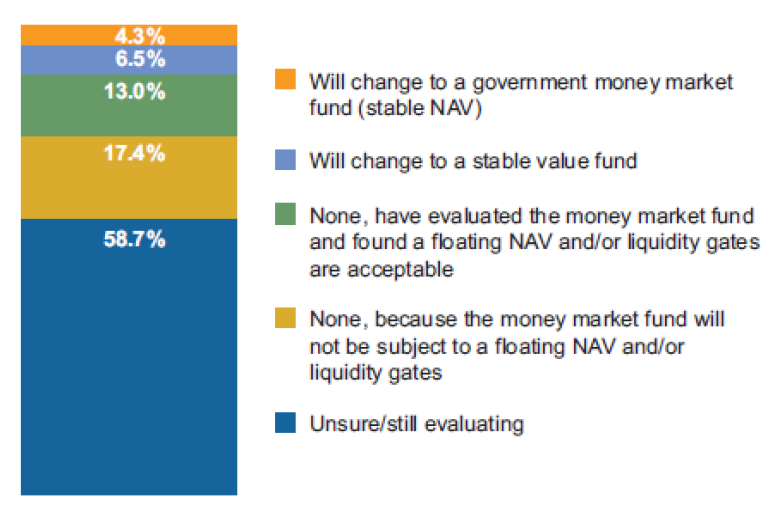 Milder said her firm sees three principal opportunities for stable value funds to attract more business in the years ahead. The first relates to the so-called “DB-ization” of defined contribution plans, in which DC plans try to borrow some of the best ideas from defined benefit plans. This would include the use of open architecture investment platforms using institutional managers and vehicles, including stable value funds, rather than mutual funds. In its latest survey of large DC plans, Callan found that 71 percent were using collective investment trusts as investment options, versus 52 percent as recently as 2013.

Stable value also could benefit from the growth and “institutionalization” of custom target-date funds, which unlike mutual funds can include a stable value component, Milder said. She noted that only 32 percent of surveyed DC plans are using their record-keeper’s proprietary target-date funds today, down from 70 percent in 2011.

Veneruso added that there also are opportunities for stable value funds as a standalone investment option for DC plan participants who are near retirement, perhaps as a retirement income solution.

“The retirement income solution is currently being described by a lot of managers as the Holy Grail,” Veneruso said. “How do you perform this alchemy of taking a pool of assets someone has accumulated and turn that into something they can live off of in retirement? Whether it’s a guaranteed product, whether it’s a non-guaranteed draw-down product, there is a lot of innovation going on there, and that’s another area where we see a lot of opportunities.”

It will be important for the stable value industry to capitalize on these opportunities. Although the use of stable value funds within defined contribution plans has held fairly steady, it tends to be older participants—those between the ages of 50 and 65—who are making the most use of the asset class. The question, Veneruso said, is what will happen to those assets once those participants segue into retirement? In other words, will the share of assets in stable value funds continue to shrink relative to target-date funds. “As an asset manager, that’s something to consider,” he said. “And it’s why target-date funds can represent an opportunity for stable value managers.”