It is accepted wisdom that stable value’s share of the defined contribution plan market has fallen since 2007, when the Department of Labor decided the asset class was not a Qualified Default Investment Alternative except under very limited circumstances. QDIAs offer a fiduciary safe harbor to plan sponsors, and it is true that since 2007 a lot of 401(k) money has flooded into target-date funds and made them the most popular QDIA.

However, that’s not the whole story. During a presentation at the 2019 SVIA Fall Forum, David Berg, senior vice president and stable value account manager with PIMCO, shared data from the Investment Company Institute indicating that while stable value’s share of 401(k) assets may have declined since December 2007, it has gone up in other sectors of the DC plan market, including not-for-profit, government retirement plans, and 529 college savings plans. 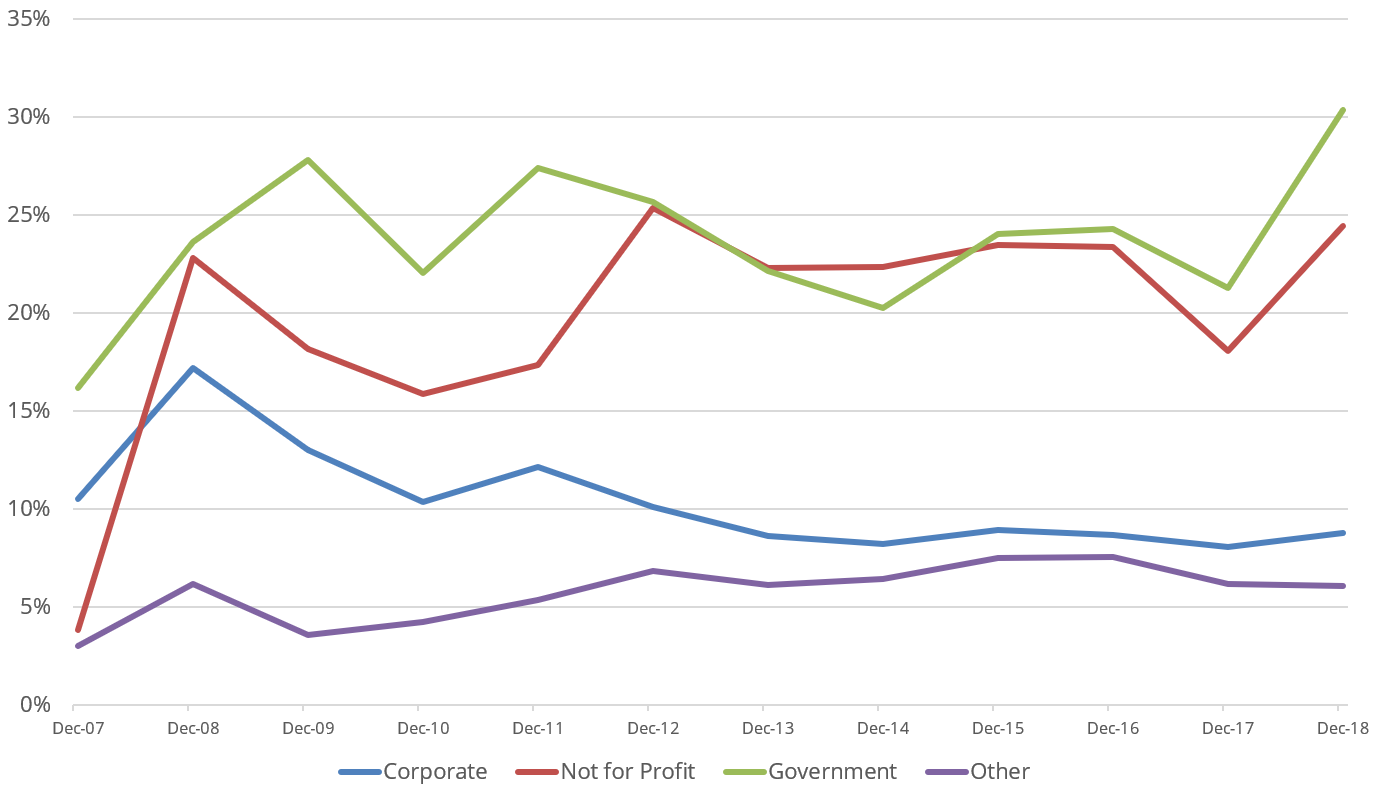 Manente said the ICI data was largely consistent with the data Great-West Financial sees in its recordkeeping platform. He theorized that not-for-profit retirement plans may have higher allocations to stable value than 401(k) plans in part because some not-for-profit plans are not subject to compliance with the Employee Retirement Income Security Act, and hence haven’t been as impacted by the advent of QDIAs. Government plans, such as 457 plans, also are not subject to ERISA.

Walker suggested that because many participants in government plans also have access to defined benefit pension plans, they may be less concerned about reaching for potentially high returns in their defined contribution plan—and taking on the risk that entails. Accordingly, they may be content to stick with more conservative but less volatile stable value funds.

While 529 plans thus far have made only modest use of stable value funds, Diskin said that market represents an opportunity for the stable value industry. However, he said, it may require more effort to educate 529 plan sponsors about the asset class, given that many are not familiar with it.

Berg said other data compiled by the SVIA showed that:

• General account products managed by insurance companies have generally had the highest crediting rates since 2008, followed, in order, by insurance company separate accounts, individual accounts managed by non-insurers, and pooled funds. Manente noted that many older general account products still offer guaranteed minimum annual crediting rates of 3% or even higher, which likely accounts for their showing on this metric.

• General account portfolios have the highest average weighted duration of all types of stable value products by a substantial margin—approximately six years recently, compared with about three years for individually managed accounts and 2.75 years for pooled accounts. Manente noted that a lot of insurance companies impose a duration limit of four years on their separate account business.

While these data points help to paint a clear picture of how the stable value market is positioned, Berg wanted to know what other types of data his industry colleagues might find useful. Radford suggested it could be helpful to start tracking what percentage of the stable value industry’s book of business is used in target date funds. Berg added that it also could be worthwhile to start collecting information about the extent to which stable value is being used as a retirement income solution.

No one argued otherwise. After all, as the stable value continues to grow it will make sense to know where it’s growing and why, and where it might find still more opportunities.