Baby Boomers, the Financial Crisis and the Recession

Many are not going to have enough money.

That was the discouraging but hardly surprising retirement-income message that Sara Rix, senior strategic policy advisor for the AARP Public Policy Institute, delivered at the 2013 SVIA Spring Seminar when talking about America’s Baby Boom generation.

Rix’ forecast was informed in part by an October 2010 AARP Public Policy Institute survey of nearly 4,000 Boomers between the ages of 50 and 64. All were in the labor force at that time or had been at some point since the start of the last recession, which encompassed all of 2008 and the first half of 2009. Among those surveyed, 59 percent had remained steadily employed throughout the recession and up to the survey date. Another 13 percent had been involuntarily unemployed before finding a new job, while 17 percent were unemployed and the remainder—about 11 percent—had already left the work force.

Not surprisingly, the recession altered retirement plans and expectations for the Boomers. Many cut back on saving, including retirement saving, and tapped into monies they had already set aside. Twenty-seven percent said they had exhausted their savings, and more than 20 percent said they had fallen behind on credit card payments. Many also delayed medical and dental care. A majority said they now lack confidence that they will have an adequate nest egg for retirement, with women even more concerned than men.

Boomers said they are taking steps to create a more secure retirement, though, and some indicated they might be willing to accept a lower standard of living. In fact, 48 percent said they expect their standard of living in retirement to be less than what their parents enjoyed. Only 22 percent expect it to be better.

When they do retire, Rix said, many Boomers will find Social Security a critical source of income. An AARP study projects that for people who were between the ages of 25 and 54 last year, Social Security will make up about 51 percent of their total income, on average, at age 70.

To supplement Social Security, more Boomers now expect to work even after they have reached the traditional retirement age of 65. In 2007, about 70 percent of workers between the ages of 45 and 54 said they expected to work “in retirement.” In a 2011 survey, 80 percent said they were planning to do so.

Working longer can be a prudent way to enhance financial security in retirement, Rix noted. Each year someone continues to work is one less year of retirement they need to fund, and one more year of collecting wages and perhaps saving for retirement. Still, it’s far from foolproof. “The best laid plans often go awry,” Rix said, noting that people often are forced out of the workforce due to job loss, disability or ill health. A survey by the Employee Benefit Research Institute (EBRI) found that only 14 percent of the respondents expected to retire between the ages of 60 and 64, although real-world experience shows 32 percent have retired by that age. 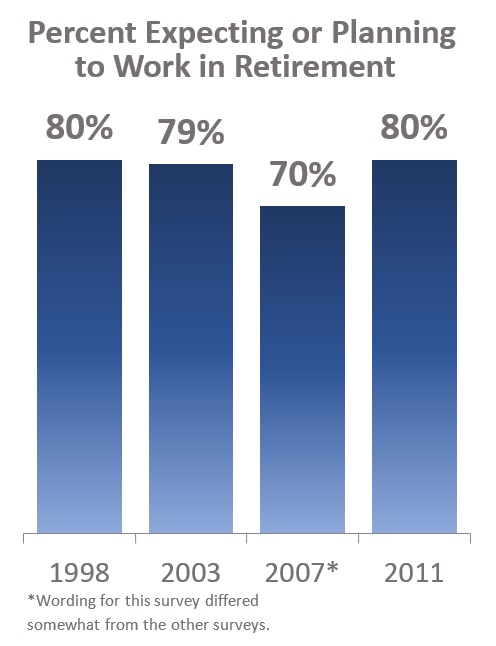 Rix encouraged those who plan to work in retirement not to quit their current job until they have a new one in hand, since it is easier for older workers to keep a job than it is to find one. She also suggested postponing Social Security benefits as long as possible, since each year of postponement yields a 7 percent to 8 percent benefit increase.

Among the 54 percent of surveyed Boomers who have already taken steps to prepare for a more secure retirement, the most common decisions they made—beyond planning to do some work in retirement—included paying down non-mortgage debt, saving more, retiring later than originally planned, investing their savings more conservatively, and deciding to pay off their mortgage.

Boomers’ biggest concerns about retirement include not having enough money for long-term care or healthcare, having their income fail to keep pace with inflation, depleting all of their savings, maintaining a reasonable standard of living, being able to stay in their homes, and, lastly, not being able to leave money to their children.

Boomers are right to be concerned about healthcare, Rix said, noting that estimates from organizations like EBRI indicate that they may need nearly $270,000 each to cover planned and unplanned healthcare needs.

To promote better retirement outcomes, Rix encourages Boomers to take advantage of training programs offered by their employers, not only to enhance their value in their current positions but also to make them better qualified for other jobs. From a public policy perspective, she added, training programs should be made more widely available.

Rix also suggested that policymakers and employers do more to promote saving, to monitor and enforce age-discrimination laws, to provide more flexible work arrangements, and to provide advice and support for entrepreneurship among Boomers.

Finally, Rix said, policymakers in Washington must take measures to preserve the financial integrity of the Social Security system. “We need to recognize that Social Security is and will likely remain the bedrock of retirement security in the U.S.,” she said. “It is important—critically important—that we encourage savings and provide people with opportunities to save more readily than many of them are doing now. But those savings should be on top of, not in place of, Social Security.”